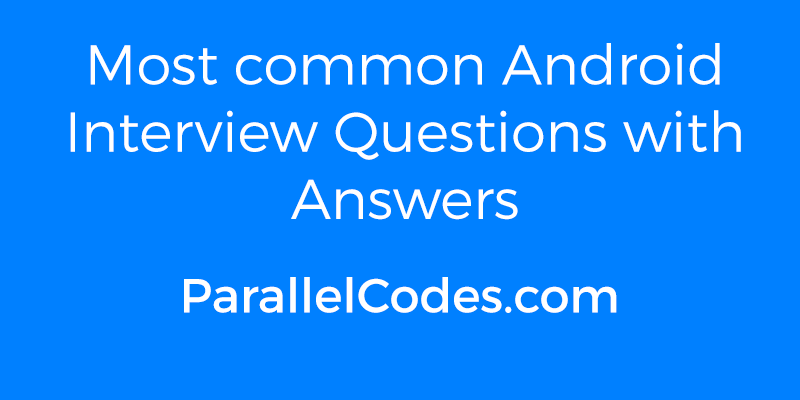 Below are some of the Most common Android Interview Questions.

An Intent in Android is a messaging object we can use to request data or an action from another app compotent. Using Intent we can pass data between activities in an application. More Info on Android Intents.

There are two types of Intents in Android – Explicit Intents and Implicit Intents.
Explicit Intent specifies which application will satisfy the intent, by supplying either the target application package or a fully-qualified component class name. In an application we normally use Explicit intent to start a new Activity instance by specifying the class name and the data to pass with it.
Implicit Intent declares a general action to perform (like downloading a file, sending a mail, opening an URL), which allows a component from another application to handle it.
More Info on Android Intents.

What is Android Activity ?

What is Android Manifest Xml ?

An Android application project must have an AndroidManifest.xml file (case-sensitive) which should be location at the project source folder. Manifest files declares all the important features and information about your App to the build tools, Android Operating System and Google Play stores.

What are different tools available for developing Android Applications?

What are the Storage options avialable in Android?

What is an APK file?

APK stands for Android Package Kit. It is an installation file for Android OS. An APK files must be uploaded to the App Stores like Google Play, etc.

ADT stands for Android development tool. They are used for developing Android applications like Android Studio, Eclipse ADT, Visual Studio with Xamarin and some more.

What is Service in Android?

Service in Android runs in background. It has no user interface. Example : Task for downloading Songs, Sending Emails.

What is Shared Preference in Android?

Android provides Shared Preferences to store chunk of data in XML files. It can be used to store string, int, Boolean variables.

Example : We can use Shared Preference to store UserId of a user while Login process for future usage. More Info on Android SharedPreferences.

What are fragments in Android?

Fragment is a part of an Android Activity. Fragment represents a behavior or a portion of user interface in a FragmentActivity. Multiple fragments can be combined in single activity to build a multi-page UI.

Can an External Database like MS SQL or MySQL be connected to Android application?

Yes, external databases like MS SQL and MySQL can be connected to Android application using Web services and open source connectors are available to connect this databases.

How to connect Android to MySQL Database?

How to connect Android to MS SQL Database?

To use features like writing or reading files on available storage, for using cellular data network or WiFi network, using GPS, making calls, using Camera, a developer must ask for permissions in Android Manifest file, without which applications will fail to perform a specific task. It is used for security purposes by Android System. Permissions are always declared in Android Manifest file.

What are differents layouts in Android?

How many languages does Android Application support?

While developing the application, a developer can add support for multiple languages for different regions and countries. But it is important for the target device to support a specified language.

What are Notifications in Android?

Notifications in Android are like messages that can be displayed in an Overlay format, in the Status bar or small Pop-Ups.

What are Types of Android Notifications?

Toasts − Toasts are Pop-Up messages used by Android application to display messages to users when a specific task is completed or to display output of a specific method. Example : On unsuccessful Login process, when a tasks like downloading a file is completed.

Dialogues − This are Alert messages like Pop-Up, dialogues inside Android applications using a design file.

Snackbars – Snackbars were introduced from Android 5.0. They cannot be exactly qualified for Android Notifications, but it can be used to display messages just like Toasts.

If you found any mistakes, grammatical errors or wrong Answers please let me by commenting below or mailing me at hitesh@parallelcodescom-79f94a.ingress-daribow.easywp.com or on Facebook : Hitesh Vikani.

1 thought on “Most common Android Interview Questions with Answers”

This site uses Akismet to reduce spam. Learn how your comment data is processed.

Get all the latest updates for free on Facebook

Get all the latest updates for free on Facebook